I Agree
What is a Tort Case and What Does it Involve in Indiana? | IndianaCourtRecords.us
Indiana Court Records

What is a Tort Case and What does it Involve in Indiana?

When any person experiences an injury or loss within Indiana, that person may file for a tort case with the state courts to recover damages. A tort claim can be filed against another individual, a corporation, the government of Indiana, a government agency, or a political subdivision. The trial courts (City/Town, Circuit, and Superior courts) are responsible for hearing tort claims, while the Court of Appeals of Indiana handles appeals from these cases. The amount in controversy determines the court where a case will be filed. Title 33 of the Indiana Code details the jurisdiction of the state courts.

Records that are considered public may be accessible from some third-party websites. These websites often make searching simpler, as they are not limited by geographic location, and search engines on these sites may help when starting a search for specific or multiple records. To begin using such a search engine on a third-party or government website, interested parties usually must provide:

What is Indiana Tort Law?

The Indiana Tort law guides the commencement and resolution of tort cases in the trial and appellate courts. Majorly, this law is codified under Title 34 of the Indiana Code. Under this law, aggrieved parties may seek compensation for civil wrongs perpetrated deliberately or negligently against them. Claims made against the state, a state entity, or public employee are governed by the Tort Claims Act (IC 34–13)

What Kinds of Cases are Covered by Tort Law in Indiana?

The tort law in Indiana covers personal injury claims inflicted on individuals. There are different types of tort claims under this law, which can be broadly categorized by intentional or careless actions, and actions of strict liability. As the names suggest, an intentional tort is one committed for the sole purpose of causing loss, harm, or damage to another person, while a negligence tort arises because of careless conduct. Strict liability torts are civil cases where a sued party is constitutionally obligated to compensate a victim, whether or not the injury sustained was intentional or due to an omission or negligence. Types of tort cases filed within the state include:

What are the Differences Between Criminal Law and Tort Law in Indiana?

The criminal and tort laws of Indiana are different yet interrelated in some ways. Essentially, a case will overlap as a crime and tort if it involves an intent to harm or injure someone else. When this happens, the case can be prosecuted under criminal and tort laws without violating the double jeopardy law (the ruling that a person cannot be prosecuted twice for the same crime). As torts and crimes are different offenses and the jeopardy law only applies to criminal cases, a defendant in a criminal case can still have a legal action filed against them in a civil court. An example of this kind of case is a wrongful death or act.

Generally, the laws, legal procedures, and adjudications of the criminal and tort law in Indiana differ substantially. The Indiana criminal law regulates the prosecution of offenders and restitution of crime victims. Persons who enter the criminal justice system are liable to a term of imprisonment, legal fines, community service, probation, and more. Criminal prosecution is also regulated by the Indiana Rules of Court, Rules of Criminal Procedure. Unlike in tort actions, any person arrested or charged with a crime is legally required to hire an attorney or have one appointed by the court.

In contrast to criminal law, defendants in tort claims are not prosecuted for careless or willful wrongdoings. Rather, they are financially culpable for unlawful acts if the court rules in favor of the plaintiff. Typically, litigants in tort claims can bring a case before the court with or without a legal representative.

What is the Purpose of Tort Law in Indiana?

Indiana’s tort law aims to offer fair remedies to wronged parties who cannot attain compensation from an at-fault party without judicial intervention. The law was also established to hold individuals accountable for their actions and deter members of the public from committing future or similar acts.

What is a Tort Claim in Indiana?

IC 34–18–2–28 defines a “tort” as any legal misdeed, failure to carry out a duty (breach), or unlawful action that results in a loss, injury, or damage to another person. For a claim to be adjudicated as a tort, there must be the proximate cause: a direct correlation between the unlawful act of one person and injury sustained by another because of that act.

How Do You File a Tort Claim in Indiana?

In Indiana, the legal procedures and statute of limitations for filing tort claims against an individual and government are not the same. The method of the filing also differs by the type of tort case. For non-governmental tort claims, a plaintiff or claimant will need to file certain forms and supporting documents with the court and serve the defendant. The statute of limitations to file a complaint is determined by the case. Usually, this limit is two years. For example:

Government-related claims, including those against public entities and employees, are filed differently. However, it is not every tort claim that can be filed against the government in Indiana. IC 34–13–3–3 lists cases where compensation cannot be obtained, including:

Before filing a claim in court, plaintiffs must first file a notice with the Attorney General’s Office, along with other proof documents (for petitions against the state) or with a local government for a city/county claim. The pleading document is titled “Notice of Tort Claim for Property Damage and/or Personal Injury.” An up-to-date version of this form can be printed from the state’s website.

Notices to the government or a government agency must be filed within 270 days of the cause of action or loss (IC 34–13–3–6). For political subdivision, the statute of limitations is 180 days. An individual who cannot give notice due to incapacitation must file within 180 days of the removal of the incapacitation. Any case that exceeds these limitations will be rejected.

After filing a notice, an individual must wait for a response from the entity. If the public entity issues no response within 90 days of obtaining the notice, the case is considered dismissed under the law (IC 34–13–3–11).. Damages recoverable for tort actions against the government are limited in Indiana: $700,000 for one injury or death in an event occurring after January 1, 2008, and $5,000,000 for all deaths or injuries occurring in one incident.

What Does a Tort Claim Contain in Indiana?

Plaintiffs in a tort lawsuit will need to file a complaint to begin a case in the state courts. Typically, the information required to complete this document includes:

What Happens after a Tort Claim is Filed in Indiana?

When filing processes are completed, a tort case will generally proceed in court as directed under Indiana’s statutes and court rules. Parties who do not agree with a judgment may petition the Court of Appeals of Indiana to modify the trial court’s decision.

Why Do I Need a Personal Injury Lawyer for a Tort Claim?

In filing a tort claim, an individual requests compensation from an Indiana Court for a sustained injury or accident. While it is not necessary to have a lawyer to file and resolve these claims, a seasoned legal practitioner is strongly recommended to understand the law and associated legal actions/rights, as each tort claim case is different. A lawyer can also assist in building a firm case, finding/presenting evidence, drafting legal documents, and securing full compensation in court. At the very least, before starting an action, plaintiffs should consult a lawyer to ensure that they do not compromise their legal rights in court.

How Can I Find a Personal Injury Lawyer Near Me?

In Indiana, any person searching for a personal injury lawyer in a specific area may use lawyer referral services provided by the local bar associations. The state bar, Indiana State Bar Association, does not render these services, as seen in some U.S. States. However, the agency

publishes a list of contact persons in local bar associations. Interested parties may obtain the name, title, and phone number of such persons and speak to them regarding lawyer referral services offered at the county level.

Furthermore, the Indiana State Bar Association provides a directory of attorneys authorized to practice law in the state. Using this directory, personal injury lawyers can be found by practice area, location, zip code, firm name, or by searching with a particular keyword. 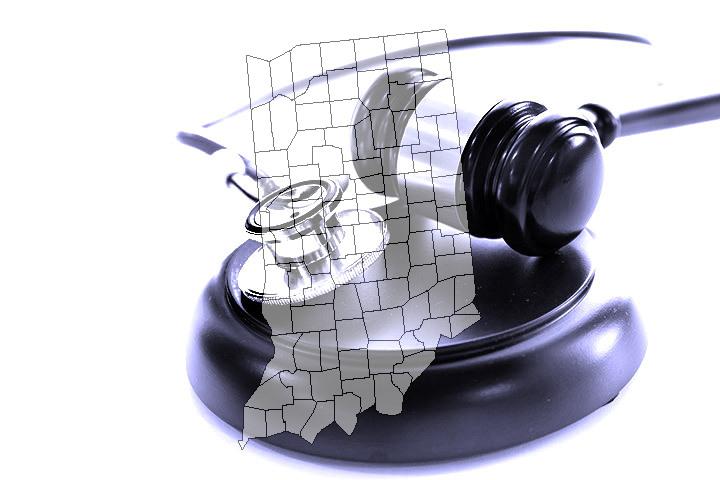