I Agree
How Does The Indiana Tax Court Work? | IndianaCourtRecords.us
Indiana Court Records

How Does The Indiana Tax Court Work?

The Indiana Tax Court is an appellate court in the Indiana judicial system with exclusive jurisdiction over tax-related matters. Depending on the type of case being heard, the Tax Court may also act as a non-jury trial court.

In the Indiana Court system, the types of cases that fall under the jurisdiction of the Tax Court are:

The Indiana Tax Court is the only appellate court in the state headed by a single judge. This judge is selected through a process that begins with the state’s Judicial Nominating Commission. The Judicial Nominating Commission is statutorily charged with the vetting and nomination of individuals for appointment as an appellate court judge or justice. This commission consists of the Indiana Supreme Court Chief Judge, who is also the ex officio Chair of the Commission, three lawyers elected by the Indiana legal community, and three non-lawyers appointed by the Governor of Indiana.

Individuals who wish to become a Tax Court judge must be citizens of the state admitted into the practice of law in Indiana for at least five years. Qualified applicants are required to submit their applications with the commission, which then reviews and vets them. Subsequently, the top three applications are nominated and sent to the state governor. The Governor then appoints one of these individuals to become the Tax Court judge.

Once appointed, the Tax Court judge will serve a two-year term, after which the judge will be required to stand in a retention election, which involves voters deciding with a “yes” or “no” vote whether the judge should remain in office. If most of the electorate votes “yes,” then the judge is appointed to a 10-year term. After the expiration of the term, judges who retain their position must stand in another retention election. However, if the electorate votes to remove the judge from office after the initial two-year term, the selection process is started afresh by the Judicial Nominating Commission. In compliance with Indiana state laws, any judge that reaches the age of 75 is required to retire, regardless of whether the judge is still serving out a term in office.

Note that any filed claim for a refund not acted on by the Department of State Revenue within 180 days is considered denied.

In most Indiana Tax Court appeal cases, the court reviews the records of the proceeding at the appropriate administrative agency to determine the following:

Oral arguments may be heard from the appealing parties at the discretion of the court. In addition to this, in some appeal cases from the state’s Department of Revenue, the Indiana Tax Court may hear any admissible evidence to aid in deciding whether taxes are being owed, and how much tax is due.

After the case records have been reviewed, the Tax Court judge will issue a written opinion, stating whether or not the government has properly taxed the petitioner. The time it takes for a case to be reviewed is dependent on the details of the case. Decisions rendered in the Tax Court may be appealed directly to the Indiana Supreme Court.

Persons who wish to access Indiana Tax Court records may contact the Clerk of the Appellate Courts’ offices. The Clerks’ office can be contacted at:

The Indiana Tax Court sits at:

However, the Tax Court may also hear cases in Allen, Jefferson, Lake, St. Joseph, Vanderburgh, and Vigo counties, as decided by the petitioner. 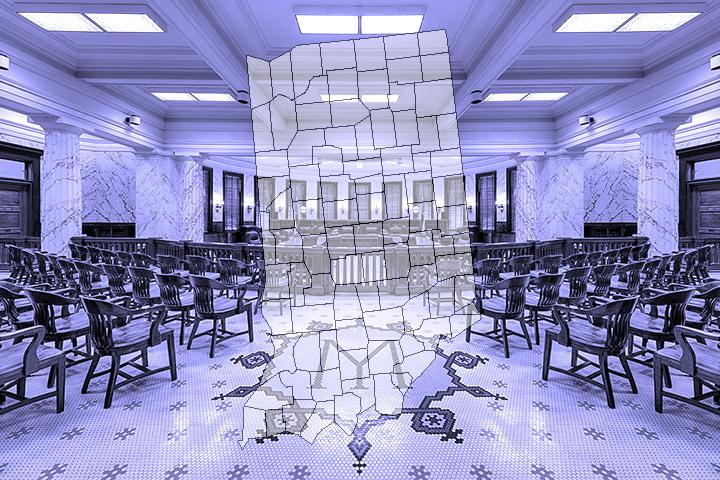