I Agree
How to Fight a Traffic Ticket in Indiana | IndianaCourtRecords.us
Indiana Court Records

How to Fight a Traffic Ticket in Indiana

In the state of Indiana, traffic tickets are notices served by the law enforcement agencies to road users believed to have violated any traffic regulation and rules in the state. Some common traffic violations in Indiana include driving without a driver’s license, DUI, running a red-light, over speeding, and reckless driving. Violations such as parking tickets, not having proof of insurance, failure to pay levies, among others, are regarded as minor offenses. Indiana also classifies traffic violations as either non-moving or moving crimes.

A road user can fight an Indiana traffic ticket in court no more than sixty days from the ticket was issued. To fight a ticket, the accused party must take the following steps:

Records that are considered public may be accessible from some third-party websites. These websites often make searching more straightforward, as they are not limited by geographic location, and search engines on these sites may help when starting a search for specific or multiple records. To begin using such a search engine on a third-party or government website, interested parties usually must provide:

Is it Worth it To Fight a Traffic Ticket in Indiana?

Yes, it is worth it to fight an Indiana traffic ticket, especially if the alleged offender can prove their innocence beyond all reasonable doubt.

In Indiana, the state’s Bureau of Motor Vehicles (BMV) operates a point system that ranges in value from 2 to 8. All persons charged and convicted of a traffic violation that carries points will have those points on their driving records for a minimum of 2 years. Individuals may face license suspension if their papers have too many points. As such, defendants are often encouraged to fight their tickets in Indiana traffic courts. In court, a judge will decide on the case and declare judgment that may exonerate the defendant. Although fighting a traffic ticket can be costly and time-consuming compared to a plea of guilt, every person has a right to contest a ticket, especially when the citation is not deserved.

Ways to Fight a Traffic Ticket in Indiana

In Indiana, individuals served with traffic tickets can choose to contest the charges as stated in the state’s legislature. The following are ways to do this.

If the judge does not rule in favor of the accused, the defense may file an appeal. Appellants that do not have attorneys can visit the Indiana BMV website to understand how appeals can be filed.

How to Fight a Traffic Ticket Without Going to Court

To contest an Indiana traffic ticket, the accused must be present in the court the case was charged to. In Indiana, failure to appear in court after receiving a citation is regarded as a guilty plea. The counties and cities in Indiana have a traffic court that handles all traffic cases in that district. However, the prosecutor and defendant can agree to resolve the matter out of court through a successful negotiation.

How Do You Get a Traffic Ticket Reduced in Indiana?

Accused drivers in Indiana may seek a mitigation hearing. Although this is still an admission of guilt, it may help mitigate the traffic ticket. If the presiding judge ruled in the defendant’s favor, the fines could be reduced or even replaced with community service. The Indiana legislature also offers a traffic amnesty program that is maintained by the state’s court system. The program is directed at helping the residents in the state get reduced fees and fines.

Can You Get a Speeding Ticket Dismissed in Indiana?

Yes, Indiana residents can get their speeding tickets dismissed by contesting the court’s ticket and presenting the case to the judge. It is also possible to reach a plea bargain with the prosecutor or ask to attend traffic school for the case to be dismissed. Indiana speed limit rules vary and are dependent on the district. However, below are some general speed limits in the state:

The Indiana speed limit regulations are regarded as absolute according to the Indiana Code 9–21–5. This implies that if the predetermined limit is 35 mph and a driver records a speed of 36 mph, then such a person has violated the state’s traffic law. Therefore that individual can be issued a speeding ticket.

What Happens if You Plead Guilty to a Traffic Ticket in Indiana?

In Indiana and other states in the country, paying a ticket is regarded as the offender’s admission of guilt. All guilty parties in Indiana are given information on the penalties. These normally are ticket fines, surcharges, court costs, and other penalties written on the traffic ticket. Also, drivers found guilty may have their driver’s license suspended.

How to Find a Traffic Ticket Attorney in Indiana

All those served with Indiana traffic tickets who opt to contest the citation will require the services of a legal advisor. Several third-party websites offer traffic-attorney services in the state. Most law firms also have both online and offline addresses that are accessible to the public. Indiana traffic-law attorneys know and understand the state’s traffic courts and system; hence, they are better equipped to get tickets dismissed. These lawyers can also help in a mitigation hearing or if the defendant is open to negotiating a plea bargain with the prosecutors. 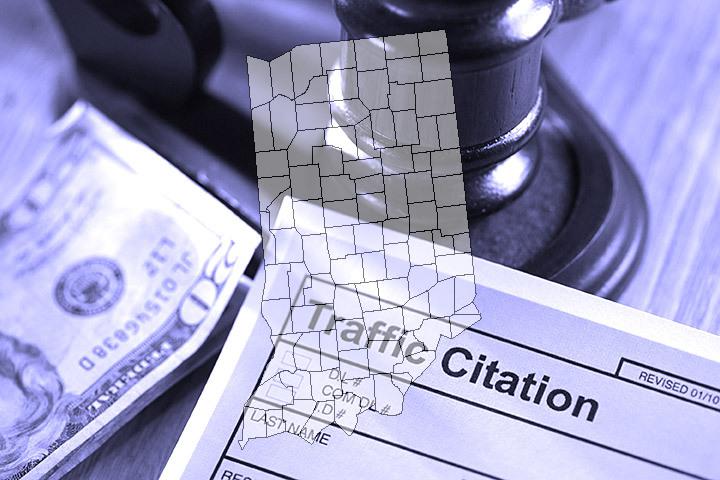